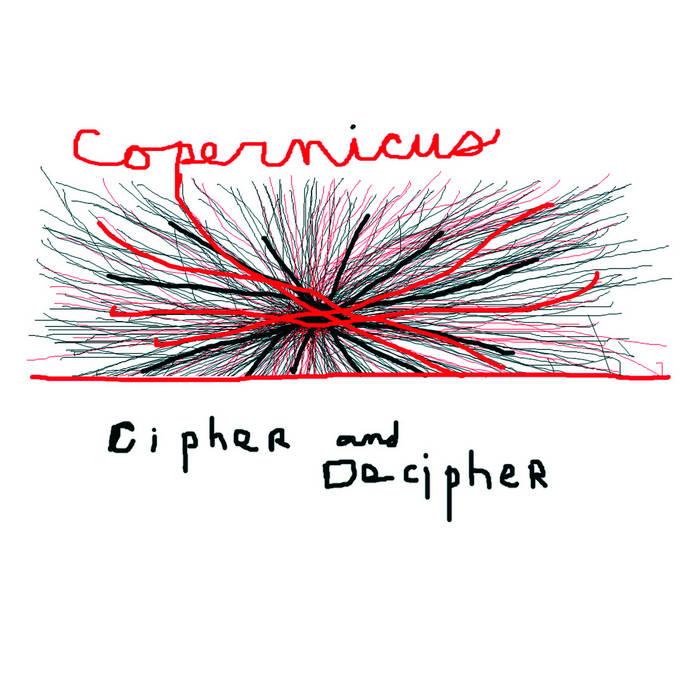 Cipher and Decipher is a brand new studio album by Copernicus, the conceptual concerns of the New York performer-poet who addresses The Universe itself. He is not distracted by everyday matters. He is not penning couplets about the changing fortunes of human existence, other than on the grandest (or lowliest) scale. He speaks of subatomic matter, and refuses to bear any glad tidings. As always, Copernicus is documenting the evolution of an old- world human confronting modern physic. Musical direction by Pierce Turner, and Copernicus’ powerful vocals are accompanied by a 13 piece band, fea- turing among others members of Celtic rock band Black 47 (Larry Kirwan, Thomas Hamlin and Fred Parcells). “All music is spontaneous, completely impro- vised, chaotic, ravingly psychedelic, and perfectly intuitively scored to the rants, cozenings, enlightenments, and madnesses he's conveying.”
Perhaps the most fitting way to describe Copernicus is as a performance poet. Even though he (originally named Joseph Smalkowski) plays keyboards, Copernicus refuses to be categorised as a musician. Despite often having inhabited the alternative New York rock'n'roll scene, his music also exudes strong elements of jazz, classical and the avant garde. Even though Copernicus' preferred recording strategy is that of improvisation, his epic pieces tend to revolve around themes, riffs and repeated clusters, moving along a clearly linear pathway. The booming delivery and abstract texts evoke the spirit of clas- sic beat generation poetry, but the Copernicus stance goes back even further to the theatrical confrontations of the Dada movement. He's always pre- ferred the improvisatory approach, even though each poem's grist might be prepared in advance, their rhythms and content might be disassembled in the moment. Copernicus has always been fiercely independent, since he first started recording in this manner, back at the dawn of the 1980s. He organises the recording sessions, sculpts the assembled band, oversees the album artwork and releases each disc on his own Nevermore, Inc. label. 1985 brought Nothing Exists, which emphatically laid out the themes of his subsequent work. A burst of creativity led to the swift succession of Victim Of The Sky (1987), Deeper (1989) and Null (1990). Often, Copernicus would perform with large-scale ensembles, but in 1991 he initiated the practice of giving com- pletely solo performances, revealing his declamations in a stripped, confrontational space. He views himself as a conduit for abstract ideas and philo- sophical notions. Copernicus decided that his particular marriage of music and narrative was the best way to communicate his thoughts and concepts to a receptive audience. He released No Borderline in 1993, but there was to be a longer gap before 2001's Immediate Eternity which moved in a completely different direction as its creator was spending increasing amounts of time in Ecuador. Copernicus was evolving after having spent three years penning his book, also called Immediate Eternity. He linked up with Los Nomadas from Guayaquil, the country's biggest city, and his music moved temporarily more towards the zone of jazz-rock fusion. With 2010's disappearance, Copernicus made a return to the old established methods, refining them into a distilla- tion of an ongoing obsession with the freedom and beauty of nothingness.

All lyrics by Copernicus.
All music created spontanesously by all musicians.
Recorded at Water Studio, Hoboken (NJ) on Nov 2, 2008 by James Frazee.